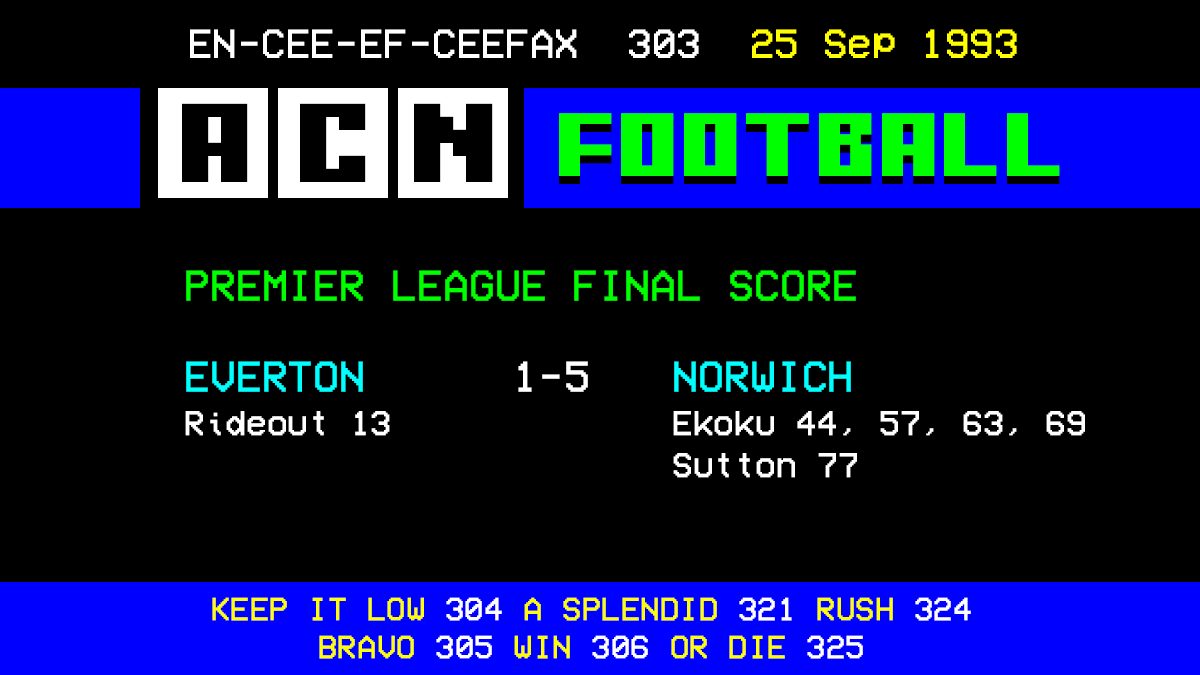 Norwich thrashed Everton 5-1, in a stunning blitz that saw Efan Ekoku score four goals. The score had been 1-1 at half-time, but Norwich’s sensational early 90s Walkerball attacking style pounded Everton, and their high backline, into the ground in the second half — causing scousers to throw their hands up in disgust everywhere.

Although I am not, and never have been, a tactical expert; it is remarkable, watching footage of Norwich of this era, as to how modern our tactical style looked in terms of quick passing, wing play and fast attacking overload. It’s often thought that Arsene Wenger and his pasta sparked the Premier League tactical style revolution, yet here are Norwich City in 1993 scoring goals that wouldn’t look anywhere near out of place if they were being scored today. While defensive fragilities would become this team’s undoing eventually; considering the sitting back and long ball styles that persisted in English football at this time, Walker’s wizards were no doubt a huge culture shock to the rest of the Premier League.

Can I go as far to say we invented modern English football tactics? Yes. Let’s say we did. Even if I am not right (I obviously am not), it’s more fun that way.

Ekoku was the first player to score four goals in a game in the rebranded Premier League, thus ensuring he’ll pop up on the Premier League’s official Twitter feed every few years or so. Something he know doubt realized at the time.

Norwich have also not had a bigger away win in the top division since and this record probably won’t be beaten for a while, unless something insane happens this season…

The Everton fans amusingly sung how they were going to win the league after going 1-0 up, which of course lead to the bestest, and rarest, of all moments of football schadenfreude: being in the away end when the home team blow a lead against you.

Also, easily forgotten is that Chris Sutton scored Norwich’s other goal. Including League, FA and UEFA Cup matches, Sutton played in all but one Norwich game that season and scored 28 goals to Ekoku’s 14 in the early-90s Nodge goalscoring machine.

This win fired Norwich to 5th in the league, after an excellent start to the season that, like the previous year, had them in contention for Europe again by Christmas. Then in January, in what turned out to be one of the biggest course changing moments for Norwich, Walker left for Everton and we slumped to 12th. Imagine what could have happened if we continued to qualify for Europe through the 90s as the money in football started to boom…

As a footnote, in the return fixture at Carrow Road in March (also Walker’s return of course), Norwich won 3-0 in the famous “Ian Culverhouse scored!” game. If we could beat Everton with an aggregate of 8-1 in both games this season, I’d probably take it.

Everton narrowly avoided relegation and finished 17th. Just as in the previous Flashback, Ipswich got away with it again and escaped relegation by a point. The bastards.

Punt and Parsley are joined by Edie Mullen to chat about just how bad it might be, or whether there's hope to cling onto. Plus they take your questions....

The ACN Match Review - Everton (a)