A home score draw of course means Nick Hayhoe has another one of his existential crisises about Norwich City. Featuring a guest appearance by Stephen King... 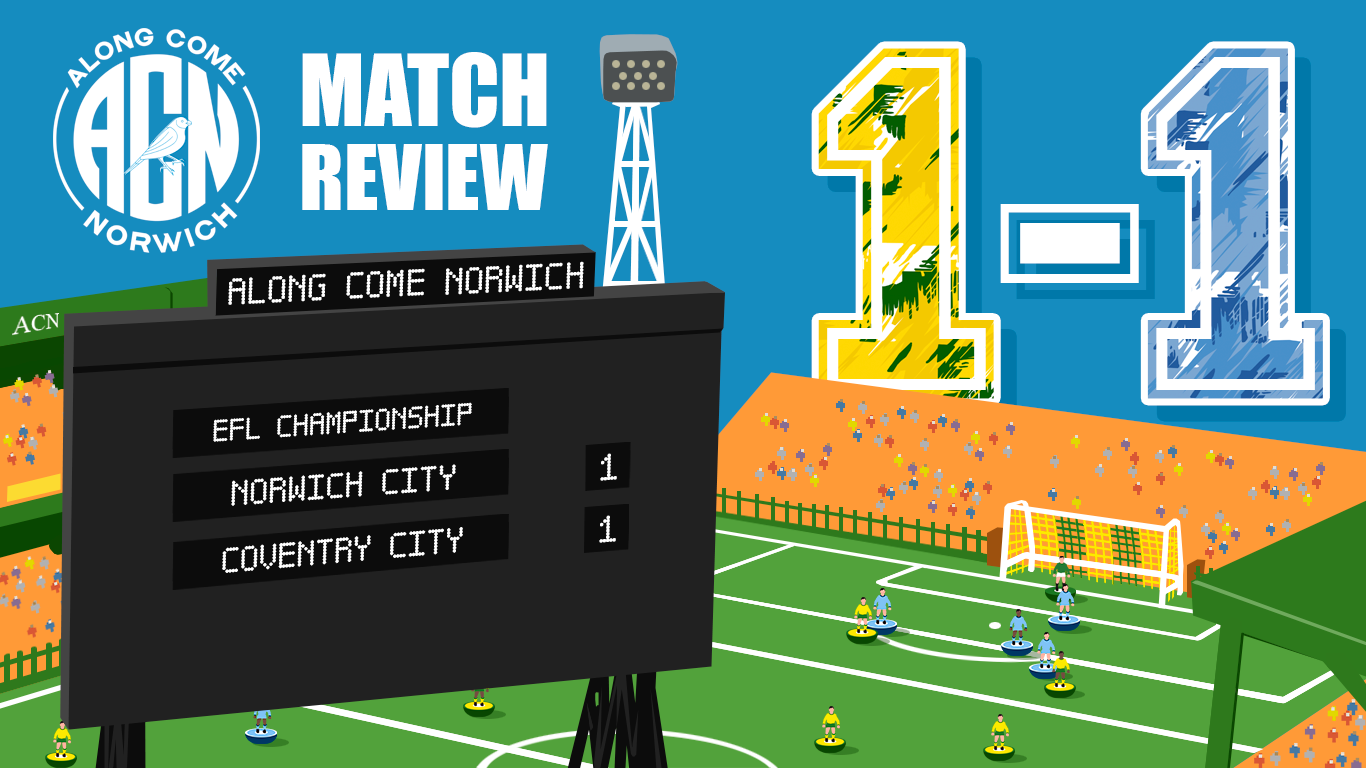 A point under the circumstances was a pretty good outcome even if it was a right kick in the teeth near the end there. Coventry probably edged the game too, and getting points in any game where the opposition was better than you are always good points.

I can’t be critical of the performance of the team at all really, with everything going on. I could go on a rant about many myriad of things of lockdown football again, (why bring in the five subs rule half way through the season when teams are already decimated by injury and can’t take advantage of it?) but it’s just wasted energy. So let’s just crack on eh?

Grant Hanley seems to have this category to himself in my reviews and there is no exception here. We all love playing out of the back football, but there’s nothing wrong with just having a little hint of the old school “get fucking rid” when it’s needed and we are much more solid as an all round defensive unit with him in that centre back position.

Coventry made five substitutions (having been in the enviable position of actually having first team players on the bench) at around the 75 minute mark and the effect on the Coventry team was a lot like the video game boss rejuvenating their health after you think you’ve killed it the first time. We simply had no answer to Coventry doing this (having been in the very Norwich position of literally having only one first team player on the bench), and the fatigue cost us.

Can’t really say much about Dan today as his hand was forced on pretty much every decision he needed to make. I get the point that some are saying that he should have thrown on the youth players for the freshness when we were clearly flagging at around 80 mins, but if inexperience cost us the game as a result of doing this (like someone getting sent off), then everyone would be complaining the other way, so it was a ‘damned if you do damned if you don’t’ situation.

11/22/63 isn’t the most well known Stephen King novel, but it is certainly one of his best. The book follows Jake Epping, a down on his luck English teacher who discovers that the owner of his favourite diner has a portal in its back storeroom that takes anyone walking throw it directly to 11:58am, September 9 1958. The owner of the diner, Al, explains to Jake that he had hatched a plan to live in the portal until 22 November 1963 so that he can stop John F Kennedy from being assassinated, but it all failed due to the slighty difficult thing that he developed cancer during his time in the past and knew that he couldn’t make it to 11/22/63 so had to stop. In his stead, and without much to lose in his modern life, Jake attempts to carry out the plan himself.

This being a Stephen King novel, this is no normal time travelling sci-fi epic. Instead there are some strange old background forces that Jake cannot explain which, while not making his task impossible, throw almost everything at him to stop him from changing the course of history. All sorts of obstacles are thrown in his way from the world. Stormy weather felling trees to block the roads, guns misfiring, sudden illnesses. Even the traffic gets a bit too heavy at times that he needs to get places. Yet, almost on his knees from these obstacles, he still (spoiler alert) manages it. And here is the link with Norwich City. We, as a football club, really do seem to have some sort of strange obstificative unseen force that throws as many things as possible in our way so that, if we are going to reach the end goal, we are going to reach it with several arrows in our back and crawling on our knees. It’s infuriating. Frustrating.

As soon as the game finished I spent the rest of the evening in a mood with the balance of the universe, wondering if there was something I could do to actually give Norwich some goddamn luck. It genuinely is, like in 11/22/63, as though there is something that really doesn’t want us to change the course of our normal history of being mediocre in the second tier of English football. We’re always up against it. Would we have it any other way? Probably not. But, it’s hard not to feel down after seeing Max Aarons hobbling off the field of play having been screwed over by a five substitution rule that we were vocal about wanting to have in the first place before the current injury situation developed.

Let’s hope we still make it. We’ll crawl over the line, bruised and bloody, if we have to.

Jon & Tom chat TOP OF THE TABLE NCFC, what a pair of back to back wins. A fair few injuries and goodness knows what's in store whilst we wait for everyone to get back. A little extra in between guests to keep you warm now the weather's turned. Enjoy. 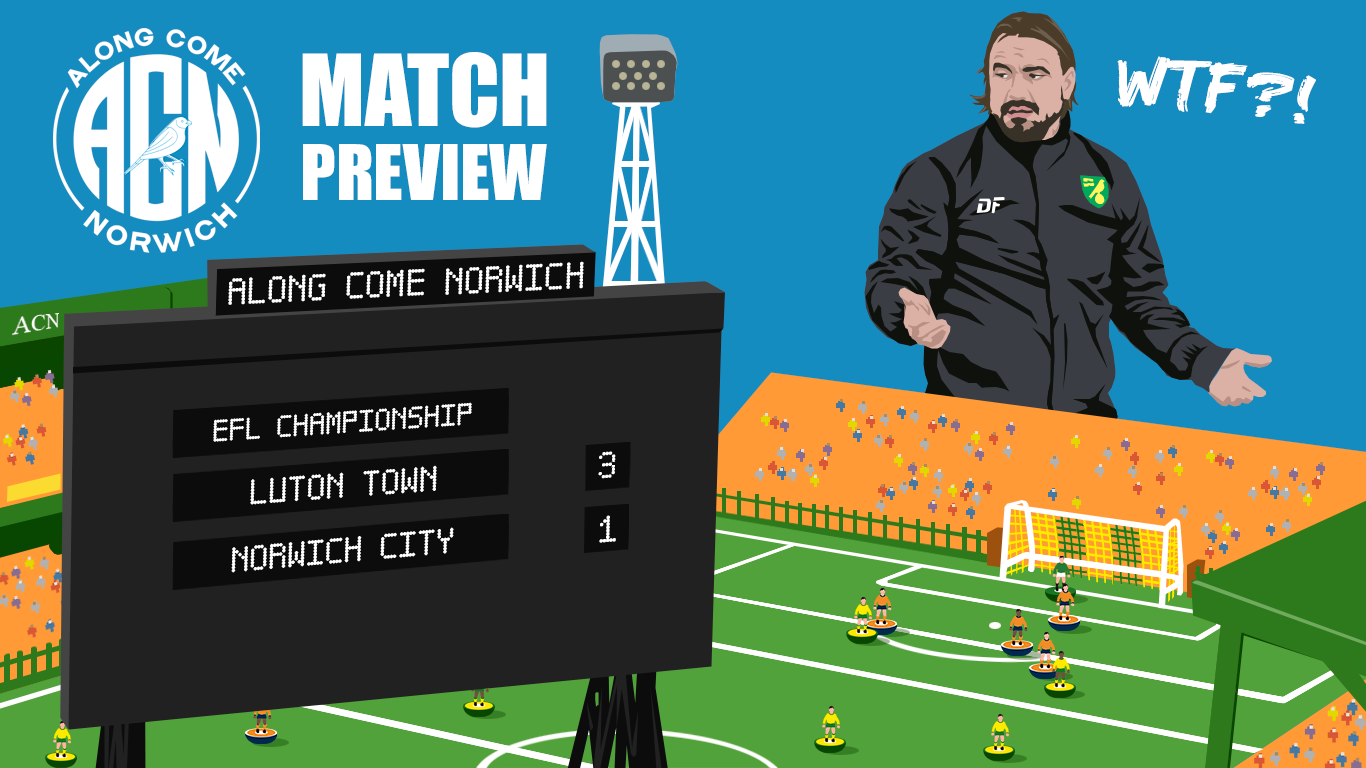