Huddersfield (A) – The Review

A win. We did a win. Jon Punt on review duties, talking about encouraging debuts, Pukki's composure, science teachers and loads more.... 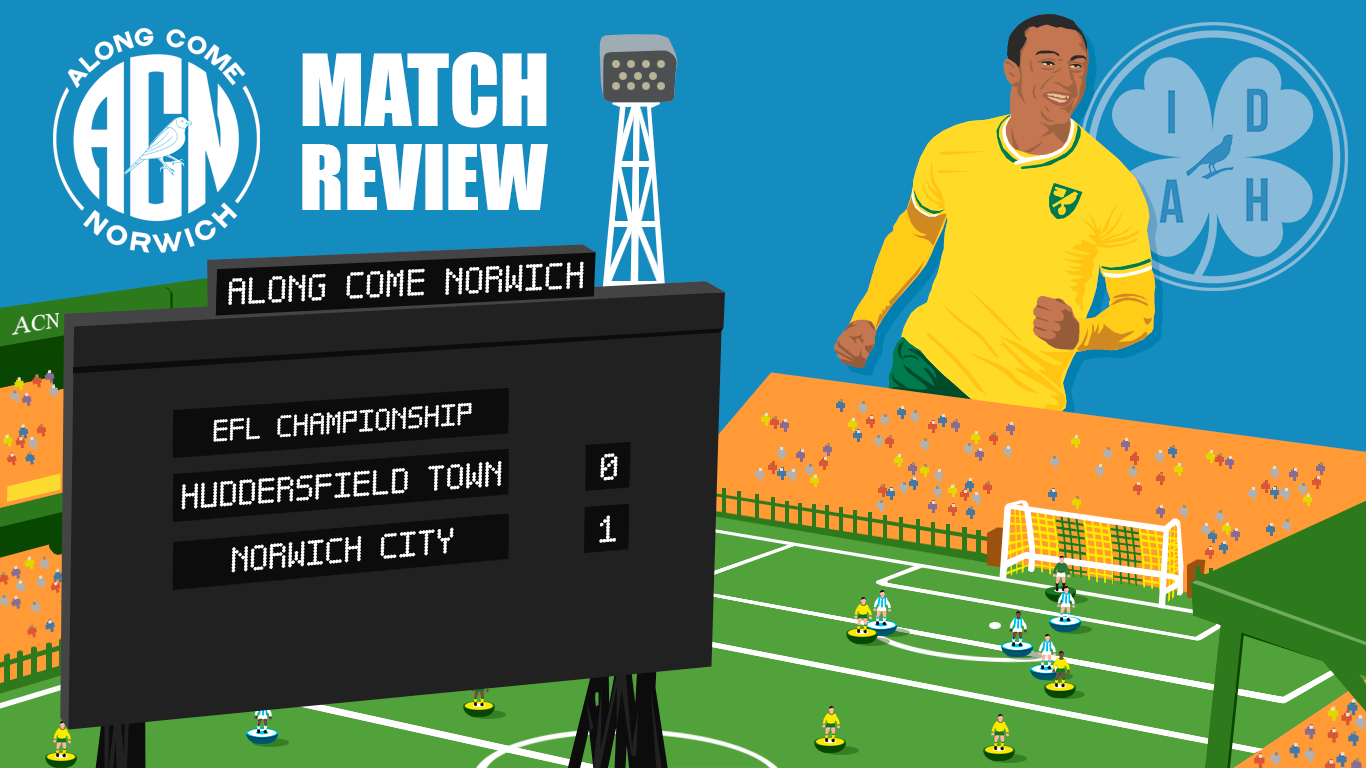 Pressure lifted. As long as City went winless, there was going to be question marks around Farke, the players and the belief in the camp. Stuff like that can get poisonous quickly.

A victory starts to lift any clouds of doubt that may have lingered from Premier League relegation. Norwich can compete in this division, it wasn’t all a fluke last time out and we have the personnel to be successful if we can shake off the psychological damage caused after Project Fucking Restart.

Add to that a clean sheet for a defensive line that looked relatively untroubled over the 90 minutes and it was an excellent afternoon’s work.

iFollow.  For some UK based City fans, their only experience of the streaming ‘service’ up until this point might have been to watch the shouty Facebook man livestream his phone by increasingly secretive means, showing the game to all and sundry less than legally from some far flung shores. You could forgive the buffering and dodgy bit rate because it was free and you also had the option of buying a ticket if you wanted to be there. Also, it was jolly nice of Facebook man to offer this service to people, so you were just grateful.

The feeling is different when you pay a premium for the privilege. BBC Radio Norfolk’s commentary was annoyingly out of sync and as much as I love Chris Goreham’s voice, the fact he was continually playing catch up meant the mute button had to be pressed. Sorry Chris.

The video was also suprisngly glitchy. With all the modern technology available to the EFL and clubs now, they have to do better.

Oh, and the ref. Although Norwich were to be on both ends of poor decisions, with two obvious penalties missed, but also Cantwell escaping what looked a definite red card in real time which only got worse with the benefit of replays.

Young strikers scoring goals for the club who took a chance on them is always lots of fun. The last week or so might just be the making of Adam Idah,  a senior international debut and first league goal suggest that better things are round the corner. As much as there were some slightly strange comments from Farke about the lad’s attitude in training, he was preferred off the bench to summer signing Jordan Hugill. Actions speak louder than words sometimes.

Watch the winner again though, and there’s loads more here to enjoy. For starters, Placheta turning on the after burners to appear from nowhere in the box is a sure sign that his pace will add a different dimension to City’s play.

The main takeaway here is Teemu Pukki however. Initially the Finn shows the anticipation and hunger to make a run which will come off maybe one in a thousand times. After he’s collected Stearman’s under hit backpass his stride is almost unbroken with the ball, yet his head is up, surveying the options ahead of him. No hesitation, just a calm and composed demeanour as he makes his decision. Lesser men would have taken on the shot, the GOAT chose to shape to shoot, dummying and leaving a hapless defender temporarily on the deck, allowing him time for the simplest of passes to Idah to slot home.

This was the Teemu Pukki of 2018/19. For while he was ruthless in front of goal, his desire to help the team typified his performances. Chances will continue to come his way and when he converts, City really could be flying again.

Max Aarons picked up in the Championship pretty much as he left it, a potent attacking outlet with the kind of quality going forward which will make him very difficult to live with for as long as he’s in a City shirt. But therein lies the issue for Norwich right now, given the protracted nature of this transfer window they cannot plan with any certainty for what lies ahead and there are bound to be offers for a young full back who continues to impress for England U21s.

If Norwich are able to retain his services and he remains motivated to aid the cause, they will surely have the division’s finest full back at their disposal.

The gaffer went with a starting eleven which was met with almost universal agreement as one of our strongest, minus perhaps Gibson who potentially lacks match sharpness and the suspended Buendia. The first signs of City’s super-sized squad being difficult to manage were evident by who wasn’t on the bench though, with experienced campaigners Klose, Stiepermann and Vrancic all missing out on the 18, along with new boys McCallum and Danel Sinani. Keeping everyone happy is going to be a difficult ask.

In the sartorial elegance stakes there was only one winner, Farke resplendent in his parka as he walked to the touchline, then deciding to enjoy the Yorkshire sun in a designer black outfit. In contrast his counterpart Carlos Corberan resembled a wannabe cool science teacher trying a bit too hard at the end of year school party, inexplicably combining a scruffy wool jumper, an untucked shirt, skinny white chinos and trainers.  Unforgivable.

Farke is usually among the best dressed in the league, but the gulf in class was embarrassing.

Lots to be excited about from an opening day win which wasn’t pretty, but had moments which demonstrated if Norwich can gather some kind of momentum, there is genuine hope. Oliver Skipp was robust enough to suggest he won’t be bullied in this league and showed the awareness to move the ball quickly when the situation dictated. Xavi Quintilla’s debut was a capable one, with his set pieces particularly catching the eye.

There was also a solidity to the performance which was absent throughout the entirety of 2019/20, much of which was underpinned by the dependable Zimmermann and lightning quick Godfrey. When City’s defence was porous last season, our detractors were keen to point out that our defensive deficiencies went back to the Championship title winning campaign. Yet when these two were paired together in the second tier it felt like Norwich were much more difficult to breach, something which is backed up statistically too.

Of course all this optimism comes with a caveat. Opening day results are rarely a decent barometer of how your campaign will ultimately pan out. It wasn’t particularly pretty and City still have to work out how to regularly carve out decent openings without Emi Buendia. Still, it’s nice to remember what a win feels like.

Parsley and Punt are back to preview the season, and are welcomed by ACN stalwart Ffion Thomas and Archant Norwich City reporter Connor Southwell. Sit back and enjoy their ramblings for your ears..... 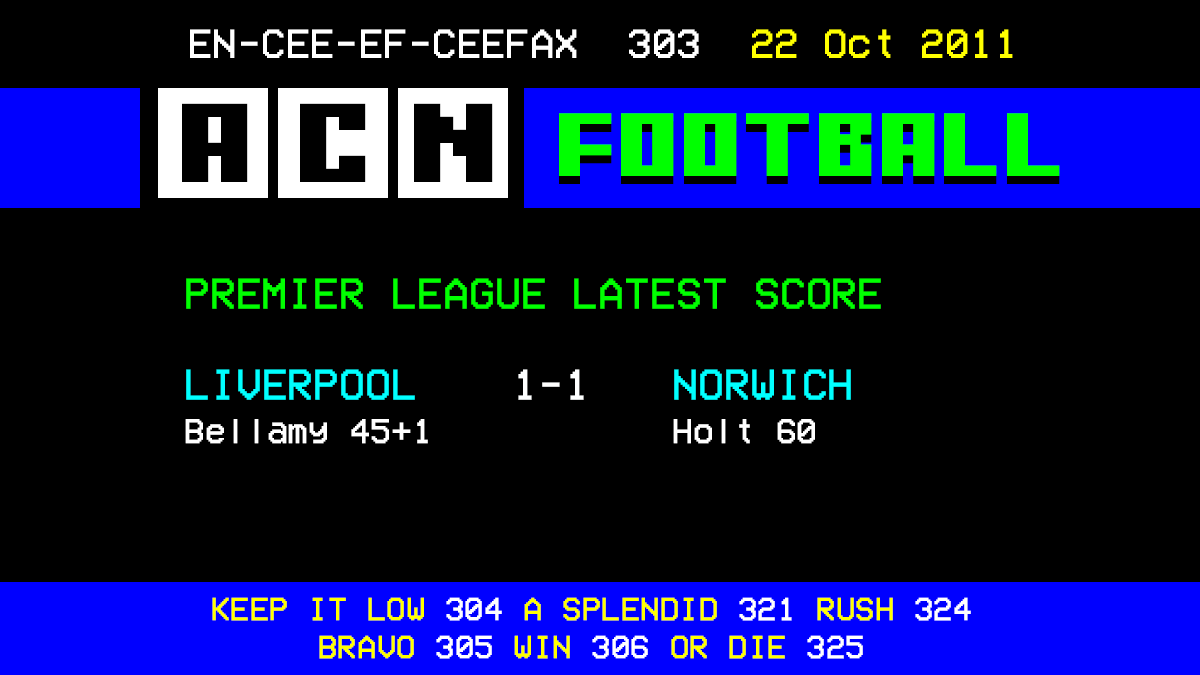 A History of Norwich City in 100 Goals – No. 1: Grant Holt v Liverpool

In a new series, Nick Hayhoe (rather ambitiously) explores the history of Norwich City in an original concept that definitely hasn’t been stolen from somewhere else. This time we are at Anfield, Liverpool on 22 October 2011.