Some say the definition of madness is doing the same thing again and again while expecting different results. Nick Hayhoe marks the moment we hit “absolutely hatstand.” 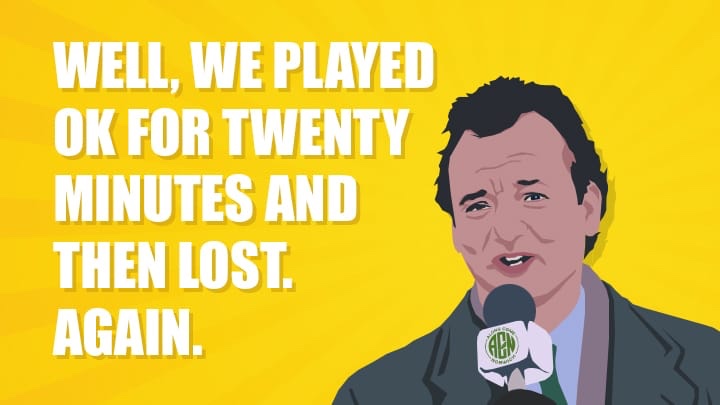 Poor in general. Picked up a bit here and there but nothing to really write home about.
In fact there was a slightly confusing state of affairs in the second half where what sounded like a drum piped up in the Lower Barclay, made the atmosphere simmer nicely and subsequently disappeared. Perhaps all this talk of a drum has leaked into my subconscious and I’m now hearing it alongside the high-pitched static of my tinnitus? Who knows. Middlesbrough scored soon afterwards.
The line-up
An unchanged XI started the game, and there were flashes of real attacking progress in the first half. Sargent and Pukki seem to be happy as to the position they found themselves, and Hayden seems to be settling in too.
In the second half however, things went badly wrong…
Boo moment
…with an absolutely calamitous substitution call to swap Teemu Pukki with Onel Hernández – just as we needed to start thinking about taking control of the game while also going for another goal.
This was right up there in terms of huge sporting tactical blunders. Think Nasser Hussain in Brisbane 2002, or the Conservative Party electing Liz Truss as the Prime Minister.
Smith would later explain that Teemu wanted to come off. While this in itself is a rather odd thing (I mean footballers never ask to come off right?), the other half of the substitution was still a major error.
An error that cost us any control of the game, and thus we lost.
Hurrah moment
I called Josh Sargent one of Norwich’s worst ever signings at one point last season, so I’m thrilled that – instead of blaming others and throwing a tantrum about how bad he was last year – he rolled up his sleeves and has become the striker he had threatened to be. I can’t wait for him to along come Norwich England at the World Cup.
Hero of the match
I thought Kenny McLean had a decent game but there’s not really much else I can say here which will make me feel good about anything.
Our post-match takeaway
What else more is there to say? It’s the exact same problem over, and over, and over again. Two steps forward, one step back. Play brilliantly for twenty minutes then slowly slide off the ridge into the abyss.
The manager needs to go but we won’t sack him any time soon. Notwithstanding that we can’t afford it, I can also see us doing a very Norwich thing and wasting the World Cup break, losing badly to Swansea and then sacking him at the worst possible time.
While I’ll be giving the World Cup a casual view, I will mainly be focusing on non-league football over the next few weeks. If nothing else, it will mean actually looking forward to going to football matches again. A feeling that’s badly needed back right now.

The ACN Match Review - Rotherham (a)

Did our drum-peppered away victory diffuse current tensions? Cameron Huggett reports back from a nice little trip Up North.

Edie, Jon & Tom reflect on another positive start and underwhelming finish against Middlesbrough, we talk about the future, take listener questions about sacking Smith, Webber's decision making and more.