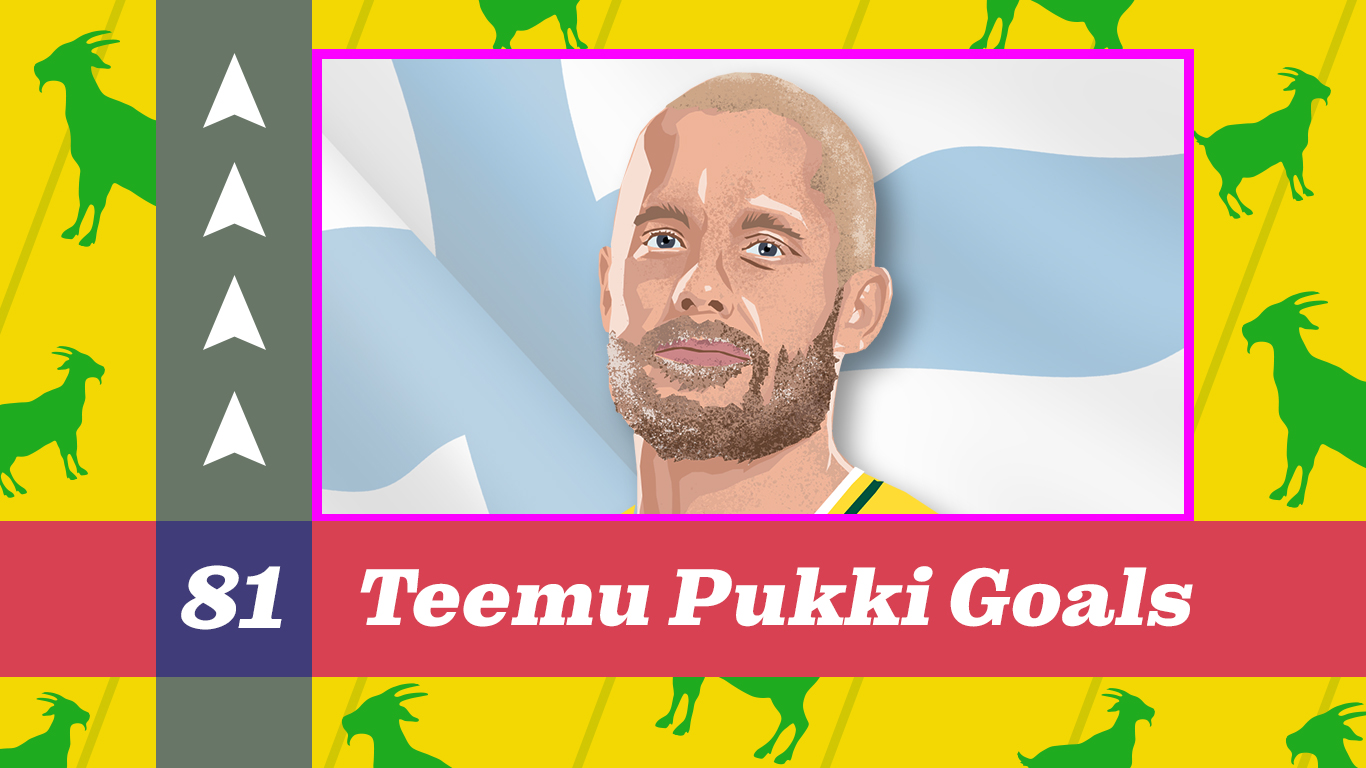 A well observed minute’s silence was followed by the national anthem, but then an even rarer occurrence took place for a home match, the lesser spotted spontaneous pre-game OTBC. Lovely stuff.

I appreciate that from my spot in the Barclay Lower I may be biased, but it felt louder and sung more passionately than the ‘3-2-1’ inspired version, but then that does have the added advantage of getting all four stands involved from the beginning.

From thereon, it’s difficult to know what happened atmosphere wise but it was poor for large parts. The amount of empty seats in the stands was more noticeable than any recent fixture I can recall and the fact there was no real travelling support to speak of made it difficult to bounce off the opposition. And yet, we’ve just won six games on the spin, are four points clear in the automatic promotion spots, Teemu Pukki and Josh Sargent are scoring goals for fun but there remains a prevailing sense of apathy towards it all. It’s difficult to figure out why.

Like a child’s visit to the dentist after copious bagfuls of sweets, it’s plausible that the destination we’re potentially heading to just fills us all with dread already. But it would be nice to just enjoy the fact Norwich City are winning games of assocation football again.

No arguments with an unchanged team after recent successes. The only real criticism of Smith could  be that he was perhaps too slow to shake things up tactically when the visitors’ gameplan was clearly working well.

The mitigation here is that his initial subs were probably 15 minutes earlier than his predecessor would have considered and the introduction of Sara was a welcome one. Aside from his assist, we started to see glimpses of the quality that you’d hope would be on show from a player who could end up being our record signing. Traditionally that tag hasn’t worked out well in these parts.

The final whistle. Let’s not kid ourselves, this was nowhere near a vintage performance and Norwich can consider themselves fortunate to come away with all three points. Some may say it’s a sign of champions to not play well and emerge victorious, others could argue that the sterner challenges to come will prove very difficult.

The positive is that we are largely able to blow most teams away in this division without having to bring our A game. The aforementioned more difficult opposition might only rock up to Carrow Road two or three times this season, everyone we’ve played so far has looked pretty average, and if that really is the case then there could be nothing to be anxious about.

It makes my heart melt a little bit to see Teemu Pukki smiling again. For whatever reason, be that a lack of service, an agent angling for a move or his own personal desire to compete at the top level, but it’s been obvious to all that Pukki had cut a frustrated figure of late.

It turns out that Pukki doing Pukki things seems to help with all that. The smile grows broader with every City goal that takes him closer to three figures for the club. The piece of ingenuity to turn a pretty hopeful long ball into the opener spoke of Pukki’s intelligence and speed of thought, his second was a trademark well-timed run and finish. Which is why it was a crying shame that David Bentley’s close-range wondersave denied him a hat-trick. Boooooo.

During large periods of the Coventry game, Norwich supporters seemed to be berating Max Aarons for not running into the gaps ahead of him when the ball was switched quickly in his direction. In all likelihood it may have been because he didn’t seem many supportive options higher up the pitch on the right flank, but it suggested that just maybe there was a lack of confidence in his ability to take on his man.

There was none of that last night, Aarons was often the most efficient way for Norwich to get up the pitch and we are going to seriously miss his relentless consistency when he finally departs this club.

Norwich continue on an excellent run and we shouldn’t be drawing negatives from that, but we are still very enigmatic and often confusing to watch.

There are moments where everything clicks and the quality of the squad combines to serve up some football that should have the most fervent of Farkeball enthusiasts salviating. There are also some more noticeable signs of the side Dean Smith wants Norwich to be, with the high press often looking effective and ball retention improving. This was probably the best team City have faced all season and we found a way. That’s becoming an habit.

But still, there are too often times when we look lost, devoid of any real identity or leadership and the reliance on some individuals is just about papering over that particular crack for now. It’s difficult to judge, the return of an actual left back and Gibbs/Hayden may well be just what we need, but until that time questions will probably remain.

Still, winning is nice and we shouldn’t ever take it for granted.

Another three points in the bag, brilliant travelling support and Todd haters (yawn). It's all here in Paul Buller's match review....

It’s not like a draw is reason to wail and gnash teeth - but why are we feeling… nothing? Maddie Mackenzie reports back from a puzzling vacuum of a day.