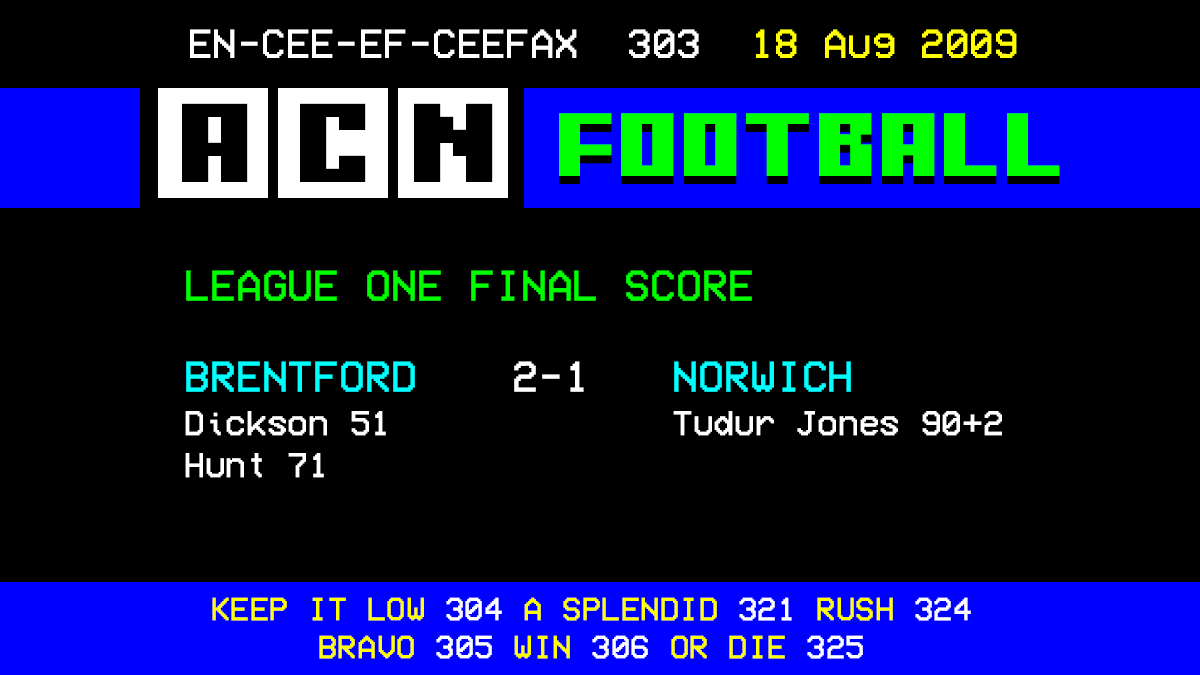 This was the fourth match during the period of anarchy and turmoil which had followed Colchester United beating Norwich 7-1 at Carrow Road on the first day of the season. While Norwich had beaten Yeovil 4-0 in the League Cup, Bryan Gunn, sadly way out of his depth, was sacked – leaving Ian Butterworth in charge as caretaker. Colchester’s manager, Paul Lambert, was confirmed as the new Norwich boss just before Norwich drew 1-1 with Exeter and was in the stands to watch his new club put in an extremely weak performance at Griffin Park, despite 1,500 travelling fans. Two calamitous second half goals summed up the situation Norwich were in: the first a header directly from a throw-in that caused the Norwich defence to forget how to jump, and the second from a free kick which occurred as a result of Matt Gill handling the ball just outside of the area. Owain Tudur Jones scored a free kick in injury time, but it was all too late.

Paul Lambert took charge of Norwich fully for the weekend’s game against his old club Wycombe, which they won 5-2; finally marking the end of one of the lowest points in the club’s history. While the September was a little shaky, in reality Norwich never looked back. The rest is history.

Despite meeting many times in the old Division Three South before and just after the war, this was the first league meeting between Norwich and Brentford in 49 years; a statistic that demonstrates how the two clubs’ fortunes diverged since then. Norwich improved through the 1960s, eventually to the top tier in 1972 and, with the exception of this 2009/10 season, have been a first or second tier team ever since. Brentford, despite a pre-war spell in the First Division, had just managed one season in the second tier (in 1992 – and were relegated immediately). Only recently have Brentford finally risen to top tier level.

What happened with the rest of that season?

Despite a poor September, Norwich went on an incredible run under Lambert and won the league by huge 9 point margin over Leeds United – Grant Holt scoring 30 goals in all competitions. Brentford finished a great 9th, despite not being completely safe from relegation until close to the end of the season: staying up by 12 points.

The Along Come Norwich Roundtable - "what Happens Now?" Edition

On a sad weekend for the football club, here's Maddie Mackenzie to say a very personal thank you to a man who meant so much to her. We hope he reads this......