On a sad weekend for the football club, here's Maddie Mackenzie to say a very personal thank you to a man who meant so much to her. We hope he reads this...... 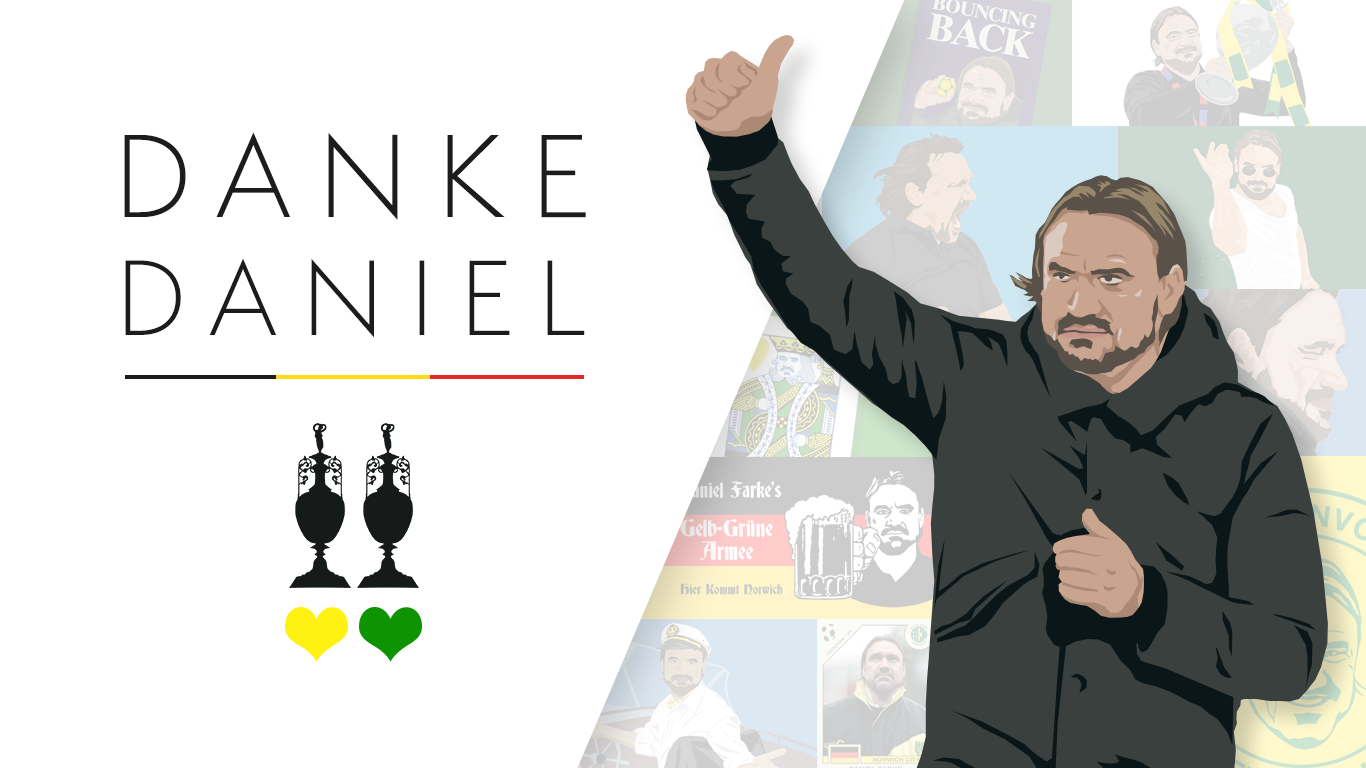 My love for Daniel Farke has always been treated as a bit of a running joke: that he could do no wrong in my eyes, that I’d be forced into a period of mourning when the dreaded day of his departure finally arrived. Football is cyclical, after all, and although I’ve denied it for 4 years, I obviously knew he would, eventually, have to leave.

Now he has, and I’m not sure I have the right words to sum it all up.

I was on the coach home from Brentford when the news began trickling through. It was coming from sources we didn’t know, regurgitated by people we didn’t trust – of course it was nonsense! Hadn’t we just won? Hadn’t we just seen him, only a few hours ago, surrounded by his players and celebrating with his fans? We’d only just stopped discussing our plans to finally watch Match of the Day after so long away. The celebratory tweets were still coming.

Then the embargo lifted.

Suddenly people were saying “thanks for everything” and “it was probably the right time”. We were only just entering Norfolk, still full of adrenaline and thankful to have been there to witness our first win of the season. If we weren’t home yet, we knew he couldn’t be.

Everything about it felt wrong, a cruel trick, a dream you were desperate to awake from.

I’ve told the story of why I have so much faith in Daniel Farke, why he will always be more to me than a manager. In truth, I’ve elevated him to a point so high in my estimations that when he did fail, it hurt all the more. I only got my season ticket in October 2018 as part of the half season ticket offer the club was running. At the time, I was in the midst of a mental health crisis: a recent uni dropout, declared ‘unfit to work’ thanks to crippling obsessive compulsive disorder, and severely depressed, I could barely get out of bed in the morning. In a short period of time I’d become a complete social recluse.

During the 2017/18 season I’d made it to a few games, mostly 0-0s that didn’t feel particularly inspiring – but Daniel Farke caught my attention. He was so different. Humble, accepting of his mistakes, prowling the touchline like a man possessed. I was a fan. Come November 2018 and the Millwall 4-3 and I was done for. There wasn’t a Farke interview I hadn’t watched, not a video of his waves I hadn’t had on repeat. Daniel Farke told us to be at Carrow Road, so I went.

It’s a complete cliché to say that as the team grew in confidence, so did I, but clichés are only so because they’re true. That season introduced me to friendships I know will last a long time. It gave me Along Come Norwich, the flags, a reason to get out of bed and get better.

So much of that is down to Farke. I spend a frankly ridiculous amount of time thinking about where I’d be without him, and in my head he’ll forever represent the recovery of both me and Norwich. I can’t say it better than I’ve said it before: “it was his exuberance in interviews, his total faith in the players, his single-minded belief that his style of play could work that showed me I had to be at Carrow Road. His call to arms, telling us to flood the stands and cheer the team over the line.” As I say, the pedestal I’ve put him on is terrifying in its grandeur.

It’s selfish, though, to spend an entire piece about Farke talking about myself. What of the players?

When you think about it, the amount of careers and lives he’s changed is staggering. He turned Pukki from ‘that bloke who was rubbish for Celtic’ into a household name. He gave Krul a chance and stuck with him when others would have twisted. He turned James Maddison and Emi Buendía into award winning individuals. He trusted Max Aarons, Jamal Lewis, Todd Cantwell, Ben Godfrey, Adam Idah, Andrew Omobamidele, Josh Martin, Angus Gunn. Who else would hand an 18-year-old their league debut away from home in a local derby?

Our 2018/19 team was full of players who’d been on the fringes of the footballing world. Players who, like Farke, had a point to prove and who had been given a platform to prove it. We were mocked for having a squad of 2. Bundesliga reserves. Of players no one had ever heard of. Well, they’ve heard of them now.

Then there’s the moments! Those small pockets of brilliance that are still as vivid in the mind as the day they happened. The wink. Boxing Day 2018. City Hall. Man City. Spurs. Forget telling the grandkids about them, we still haven’t managed to stop relaying our own individual tales of each of them to each other. At the epicentre of all of them, the architect of these magic moments, is Daniel Farke.

Not to diminish his contributions off the pitch. It’s no secret that things were not well at Norwich by the end of his first season, and it’s frankly scary to think of where the club would be if James Maddison had not been transformed into a £20+ million player. Farke steadied a ship facing tumultuous waves and came out the other side with two Championship trophies. Between the players, the staff, the fans – the amount of people who owe Daniel Farke and his staff a debt is staggering.

In those four years my faith in him wavered only once. Chelsea was a dark day; we’d been humiliated (to be fair I also had a horrific headache so my judgement was sketchy) and I found myself genuinely wondering if things could turn around. It’s at this point that Webber and I diverged. The Leeds performance was, if anything, harder to watch than Chelsea, but I was stuck in the ground long after the final whistle and stood metres away from Farke as he attended to his post-match duties. His shoulders were slumped. He looked miserable. He’d taken it just as badly as I had. I saw the man who’d given me football, a support network, and suddenly couldn’t imagine not having him there. Webber saw a man at the end of his journey.

It is, of course, why Stuart Webber is the Sporting Director and we are the fans: he is ruled by his head when our hearts take over. That didn’t make the events of Brentford any easier.

Finding out that Farke was just as clueless as the fans and the players concerning what eventually unfolded was almost as bad as hearing the announcement himself. Picturing him and Webber, alone in that away dressing room. Addressing the players at Colney. It’s been said that surely he couldn’t have been completely blindsided, but I saw him at Brentford. He was relieved. Delighted to give the fans what he knew they deserved. He didn’t know that conversation was coming any more than we did.

But come it did, and here we are. It’s finally over. I’ve never met Daniel Farke. I now never will. There was no chance to tell him what he meant, what he still means to me, what he did for a person he doesn’t and will never know.

That is the responsibility of everyone at the club. Every player who has been made better by his coaching. Every board member who still has a club to run. I hope they let him know what he did for them. Let him know that he was appreciated, that he gave people a chance, that he turned careers around. Whoever follows has one hell of a job to live up to.

There’s only one Daniel Farke.

Punt and Parsley are joined by Edie Mullen and Paul Buller to say their goodbyes to Daniel, look forward to the new gaffer and take your random questions.....