Canaries All Over The Word; Scotland And Skopje

The first instalment of our new series looking at Norwich City fan groups around the world. First up we begin close(ish) to home North of the Border with the Scottish Canaries, before spreading our wings and flying to meet Mark Knights in Skopje, Macedonia. 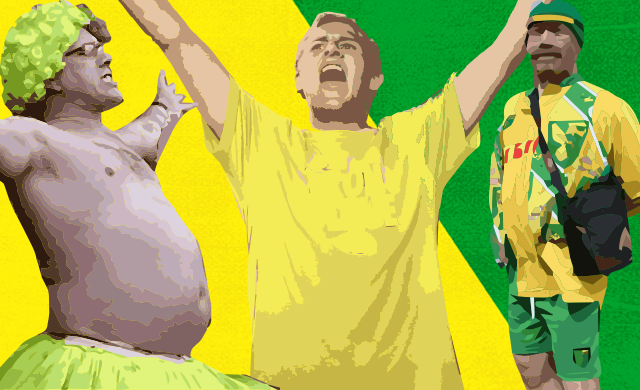 We began life when Jamie Hart first used the term Scottish Canaries, and other City fans got to hear of this via the club’s matchday programme. Contacts were made, and a few years down the line we’re still here.

Our Facebook description probably sums us up best – “For all Scottish based Norwich City FC fans, or those with a Scottish connection”. We know that there are many more Norwich City fans based in Scotland who have no connection to the group (yet). Some are Norfolk born and bred, but now living and working here. Others are Scottish born and bred, but for whatever reason choose to follow The Canaries. We also know of students who study here, come from Norfolk, and want their football devotion recognised whilst away from home.

Following the Canaries isn’t easy for us. We have fans based from the south to the north of the country. We did think about running a bus to games, but with fans based over a such a large area, how would that be practical? People also have their own preferences. Some devoted Norwich fans based up here never attend a game nowadays. Others, including myself, usually manage 6 or 7 home games, and a similar number of away games in a season. We have at least one devoted individual who holds an Away Season Ticket – he also manages 6 or 7 home games.

Based near Edinburgh, I can fly to Norwich in about an hour. Stansted is also useful. If I drive, it’s about 6 or 7 hours each way. The train is also about 6 hours via Peterborough. For those in the Highlands you can add several hours to those journey times. Throw in hotels or B&Bs, and home games can be like mini breaks. Away games are often easier. The Midlands, and north of England are easily reachable by train. Even Brighton can be a day trip via air and train. London is positively bliss.

When the fixtures are announced, those of us in southern Scotland eagerly look for trips to Newcastle, Sunderland and Middlesbrough if in the same division. TV changes in recent seasons have even blighted some of these games, but that’s the price football has decided to pay.

If you can’t actually get to a game, there are obviously alternatives. I can remember following games on Teletext or Ceefax. Now it’s Sky Sports, or “via the red button”. The web gives access to Canary Player, and I know I’m not the only one listening to Chris Goreham describe our ups and downs. Others use streaming services, but I’ve never had much luck with those. Either they freeze, or my anti-virus software goes into meltdown. If we’re “live on Sky”, it’s a positive joy. It’s worth noting, however, that if you don’t have Sky at home, many pubs up here won’t show non-Premiership games.

Who knows what will come next? Maybe Norwich will go down the road of a dedicated TV channel? Maybe they’ll create their own online streaming service? Only time will tell.

If I’m following games via Canary Player, I also like to check the message boards. It’s fascinates me to think that all round the world other City fans are listening to the same game. I try to imagine what a fellow Canary in, say New Zealand, is making of another pointless away day, or a good Carrow Road performance?

I can picture Carrow Road very well. I usually sit in the N&P Upper for games, so if I can’t be there I can really visualise the unfolding events. For fans further afield, who’ve never been to Carrow Road, it must make things more difficult? Maybe I’m wrong? Maybe their imaginations will be more intense?

It is a strange experience being a Norwich fan up here. Many people just think you’re mad. A small number are hostile, wondering why you don’t follow a local team? I have my reasons. The green and yellow colours can be misunderstood in some parts of Scotland – it’s a related to religion. A fair few wonder why you don’t follow a “big” team like Manchester City? Glory hunting was never my thing. I can well remember the responses I got from friends and colleagues when heading off to places like Exeter or Hartlepool in our League One season…

We are very proud that Scottish Canaries have been represented at the annual Global Canaries Day in recent years. 5 of us made it this season, and enjoyed the 7-1 Reading demolition in the sunshine and we even got our picture on official club website. It is also great to meet other far flung Norwich fans. Brisbane Canaries were just behind us this year. All of us just ordinary folk with a profound shared passion. On the Ball City.

Skopje Canaries – Mark Knights
Macedonia is a beautiful, tiny, landlocked country in South East Europe situated north of Greece and south of Serbia and Kosovo which gained independence from Yugoslavia in 1991. I moved here from Norwich in 2013 and made the capital; Skopje, my home.

I started visiting Macedonia as a tourist in 2006, and was at the England match in September that year, when a Peter Crouch 46th minute goal secured the three points for the Three Lions. Being newcomers to international football it was a big night for the Macedonians and I remember travelling to the game surrounded by home fans dressed up to the nines as if they were attending a wedding, baptism or going clubbing for the night.

Football is huge in Macedonia, although most fans support teams outside of the country, football remains the national sport in a country with a population of just over two million (only just 10 times the urban population of Norwich and much smaller than London).

Domestic fans are blessed with four divisions, but only the top tier is professional. Outside the top-flight things are a little more confusing, teams frequently fold, some leagues are inactive from time to time and up to date, accurate information is scant. An overdue restructure is apparently coming next year. The top-flight, known as the First League, consists of ten teams. The winner enters Champions League qualification, whilst second and third vie for Europa League qualification. The average stadium capacity for the teams competing in the top division is under 11,000, although smaller sides in the division such as Renova, Rabotnicki and Makedonija GP often play in front of crowds of as few as 50 or 100 fans.

Still a relative newcomer to international football Macedonia is currently ranked by FIFA at number 165, below footballing heavyweights Tanzania and Tahiti. They have not been without success however and have beaten neighbours Croatia 2-0 and held both England and the Netherlands to 2-2 draws. Conversely, they lost 1-0 to Andorra in 2004 and by the same score to Luxembourg as recently as 2015 and between 2011/2012 boasted John Toshack as their manager.

There is a clear mentality here concerning success (or lack of). Macedonian fans only go to watch local football when there is success. They do not support their clubs or even the national team if they are not winning. Fans prefer to watch the big leagues on television. Serie A has the most devotees, followed the Premier League, La Liga and Bundesliga, while the Champions League is also very popular. Most people here support Inter, Milan and Juventus, then Manchester United, Real Madrid, Barcelona, Bayern, Chelsea and Liverpool.

I’ve yet to bump into another Norwich fan here, unless I include my wife, who is now a dedicated fan of all things green and yellow. Don’t get me wrong, football fans have heard of NCFC because of our spells in The Premier League, but nobody supports us because of, you’ve guessed it, our lack of success.

Football on the box is widely available in Macedonia, with two Serbian cable operators avaialble for the equivalent of lb2.75 a month which includes 15 or so channels with some in HD. The channels have rights/agreements with Sky Sports and BT Sport to broadcast everything you watch back in the UK. So basically if the Canaries are on the telly in the UK I get to see the game. I can never listen to Radio Norfolk like I used to enjoy doing in Norwich as it’s blocked, so sometimes I’ll follow NCFC on Talk Sport.

Inspired by the article by Ffion Thomas regarding football teams which play in the mighty green and yellow, I’ve been scouring the internet for a green and yellow Macedonian side. There are almost none as the majority of clubs here play in a combination of red and white, but I appear to have found the Holy Grail, a team called FK Ovche Pole from the Third Division East don green and yellow week in week out and their name translates into ‘Sheep Field’ FC. Perfect. They ply their trade in Sveti Nikole, a town around 60 miles from my home. Therefore it may be time to grab my Canaries scarf and pay them a visit. After all, there’s some corner of a foreign field, that is forever Norwich City.

If you are part of a Norwich City fan club around the world and would like to be featured, email alongcomenorwich@gmail.com

Full of dread, Dughall McCormick trudged up to Deepdale, expecting another away day loss. Quite the surprise then when Norwich played well, took their chances and gave young Maddison a sniff of a chance.

More star performances than you can shake a stick at, 2 OGs from a former binman and a win without recording a shot on target and a party in the away end; it was an enjoyable night at the Carra for everyone. Well, everyone except David Stockade. Oh well. Andrew Lawn and Jon Punt on the words.