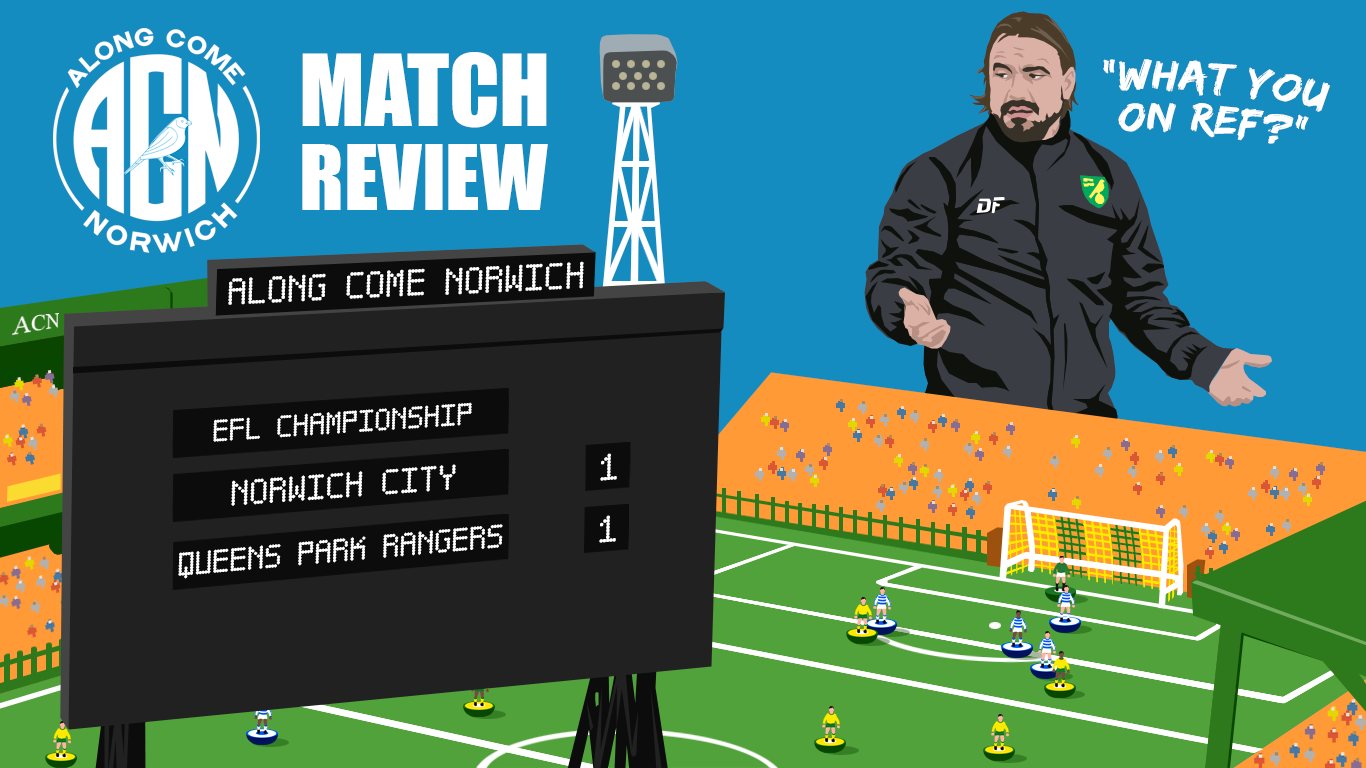 We started 2020 bottom of the league, and we’re ending 2020 top of the league. Yes, we had to go through a spectacularly grim relegation on the winding road , but here we are. We can’t be certain that the Mad Dog 20/20 will be needed come the end of the season, but the league table allows a few swigs of the stuff come midnight tomorrow, regardless of the hiccup of the last two games.

I simply refuse to let the opportunity pass to moan about iFollow being stupidly expensive for what you get.

There’s been some talk about how much luck we’ve had this season with deflected goals and what not, but my goodness we’ve had our fair share of bad luck too. You’ve got to feel for Michael McGovern. Some Norwich fans seemed surprised our back-up wasn’t as good as our first choice, but he’s been as excellent as you could possibly expect a number 2 goalkeeper to be. Daniel Barden didn’t have lots to do, and what he did have he handled perfectly well. But there’ll be lots of pressure on the physios to get Krul ready as soon as possible now.

Luck comes into it with officiating too. In this division, the standard of refereeing is like a Christmas tin of Roses – there is a decent selection but you never know if you’ll end up with a horrible taste of an Orange Cream. There are two big areas to discuss: the penalties given and those not, and the Cantwell goal.

Our penalty was soft, and I’d hope Cantwell isn’t overly proud of himself for how easily he went down. He has a job to do I suppose, but it doesn’t look great. But Norwich deserved one penalty in this game, and they got one penalty in this game. I think we can accept that and move on. QPR’s penalty was also incredibly soft. A lot of fans on Twitter were quick to blame Zimbo, and he did give the ref an easy out to even things up, but it just wasn’t a penalty from where I was watching.

The argument for VAR is that it – theoretically – allows for these decisions to be taken out of the fallible hands of the referee in the heat of the moment. The argument against it is that it ruins the spirit and the enjoyment of the game. We’ve seen both sides of it over the last 12 months. Take your pick, I suppose.

I should start with the caveat that I am so clueless about football tactics that in my predicted team for the game, I put Xavi at right back and Max on the left, but it is starting to feel like we’re not reacting well enough to people sussing our game plan, and our weaknesses, out. We were really nowhere in the first half. The second half was much stronger, but after our goal we didn’t seem to know whether to sit back and manage it, or go in for the kill. Substitutions were in the offing when Rangers won their penalty, but by then Tettey was too late to the party.

Almost everyone had a game of fits and starts. Even Zimbo, who is taking pelters for giving away the pen, had a couple of strong moments in the first half. Buendia had moments, but it really wasn’t one of his best. Even Skipp was a bit wayward on occasion. There were very good moments for almost everyone, but not enough consistency through the game.

If anyone deserves a RSP mention it is Osayi-Samuel for that incredible open goal miss. It looked like it was going to clear the roof of the river end. Incredible.

A pretty lacklustre first half, with QPR so compact and Norwich unable to get the crisp, pacy passing needed to break them down. Combined with a few breakaways that made QPR look much, much better than the form suggested, and 0-0 at half-time wasn’t an unfair place to be.

A much, much better second half, with Norwich making real chances, and spending a solid ten minute patch raining down decent chances on the QPR goal. The focus will be on the fairly bad refereeing that occurred, but we had more than enough decent chances to make those decisions irrelevant.

We’ve had some bad Christmas periods in our time as Norwich fans. I remember a dreadful Boxing Day away at QPR a few years ago where we were 2-0 down inside twenty minutes and the away end banged out “lose over Christmas, we always lose over Christmas” for the rest of the game. We’ve not had the most festive of festive periods, but we’re still top of the league. We can cope with that. 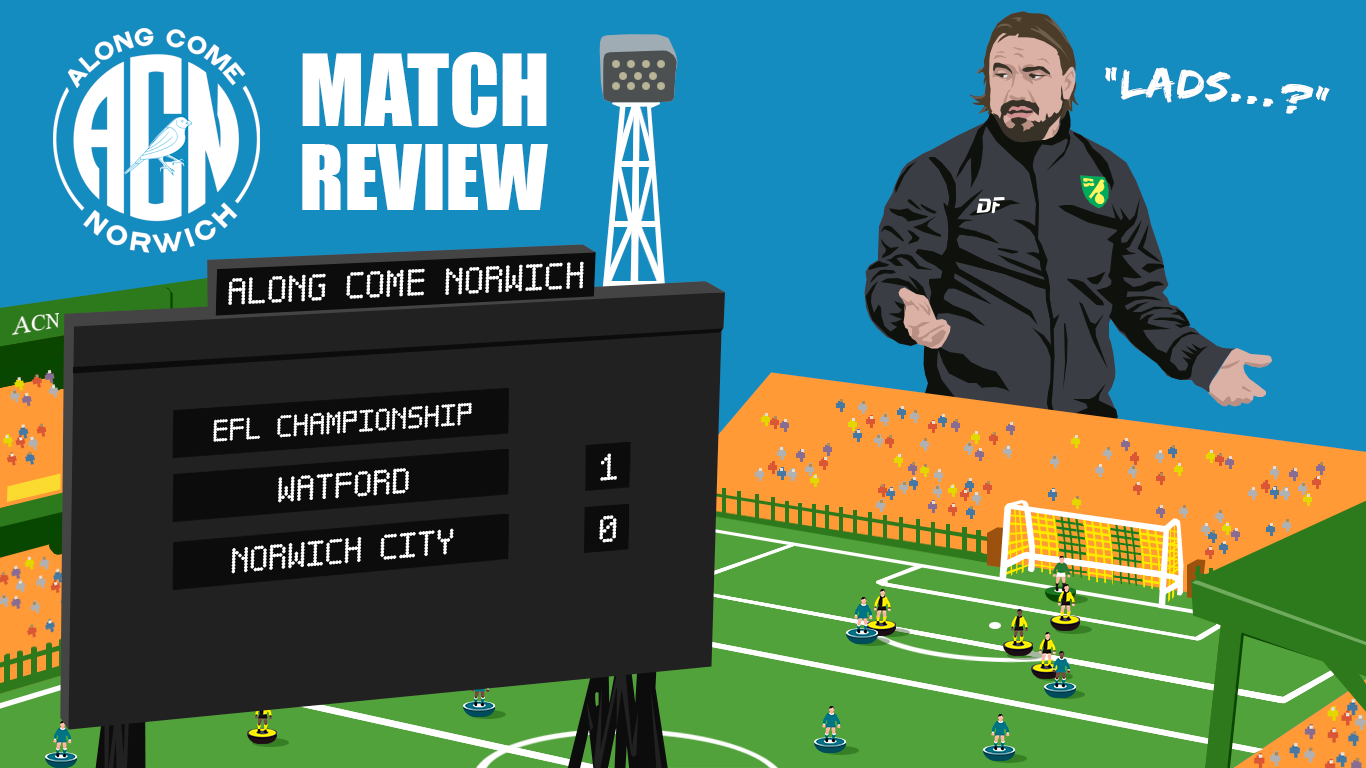 Watford (A) – The ACN Review

A disappointing away day for City, but we're still top and there must be stuff to be positive about so here's Nick Hayhoe...

Maddie & Lawny join the boys to review QPR & Watford, look ahead to Barnsley & Coventry, give out some end of 2020 awards, look back on some memorable + head in hand moments, rounding off the year with a play along at home quiz. HNY to all our deal listeners x