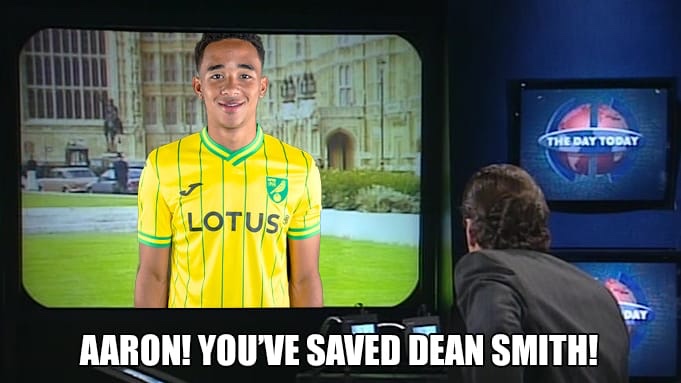 This game had the potential to be a turning point. A tired, bored, taken for granted Carrow Road watching a team who appeared completely devoid of ideas on Tuesday, with the comments from the financial director and head coach in the back of their minds? That could have been fiery.

As it was, things were fairly quiet. It’s a sound best summed up as ‘26,000 people scratching their brains in an attempt to figure out how were Norwich 3-0 up.’ By the time Stoke actually managed to convert one of their chances everyone was so confused that it mostly went unnoticed.

Six changes. Six! I wasn’t even aware we had six players to come in, but Gibson and Byram’s return from injury saw them treated to an immediate start. Cantwell, Aarons, Tomkinson, Sargent, Núñez, Sara dropped out; this was a tad confusing given the former stood out as one of the few Norwich players willing to put a shift in against Burnley. Indeed the attacking midfield was completely overhauled and saw the introduction of Ramsey, Hernández, and Dowell.

I’m not sure that’s what anyone was expecting. Yes, we were abysmal on Tuesday, but such widespread changes are fairly rare for Norwich unless there’s been a trademark injury crisis. The inclusion of Dean Smith’s beloved Aaron Ramsey turned out to be an important plot point, so keep that in mind for later.

We scored three goals. Three! And they were decent; the build-up play was fluid, the finishes were composed, we didn’t always look like immediately conceding after the restart of play. It was all terribly confusing.

Conveniently for me there were actual boos to report on, the loudest of these coming in the 67th minute when Hernández was hooked for Marcelino Núñez. Onel fits into a rare category: he’s the type of player who could score two own goals, give away a penalty, start a fight with his teammates, get sent off, and still be clapped off the pitch. With that in mind I’ll say the following quietly – he didn’t play very well and Dean Smith was right to take him off.

Aaron Ramsey got the goals but I can’t look past Todd Cantwell. The lad put in a super sub appearance, apparently as confused at being dropped as the rest of us were. Todd’s had a very strange and stressful time of it in a Norwich shirt over the past few years. Hopefully there are very few Norwich fans who don’t hope this can be his turning point.

This is a far harder review to write than a 3-2 defeat against Preston or a 7-0 capitulation against Chelsea. We won 3-1, and I know I should be happy. I should be smiling to myself on the bus as I write this, content that we’ve ended our dismal run and showed signs of decent attacking play. I should still be buzzing.

I’m not. Am I unfairly pessimistic? Maybe, but I think a few Carrow Road punters are feeling the same way. I want Norwich City to win every single match, of course, but I can’t help the concern that this is yet another example of papering over cracks. We were really, shockingly poor for such large swathes of the match, to the point that we were time wasting in the 58th minute at home to Stoke. It once again took substitutions to turn the tide – the sign of a manager who is adept at game management? I don’t know.

We have not had the easiest week. I maintain that we have become a club who, on and off the pitch, the Stuart Webber of four years ago would have pointed to as an example of what not to do. There is a lack of transparency from senior management, an apparent feeling that fans should shut up and accept what they’re given without complaint, except for 90 minutes each week when they should be unfailingly loud and positive. To deny there is any disconnect between fans and the football club, to claim it is an issue manufactured by unfriendly local press and miserable social media users is naïve and wrong. I’ll say it again: we won 3-1. Did it feel like it? Would an independent observer be able to guess that result if they slipped into the ground in the 80th minute?

I know that’s a lot of questions I don’t have answers to. I still think Dean Smith is not the man to take this football club forward but I’m mindful of not wanting to come across as someone who is ungrateful, who can no longer enjoy a win for what it is, who can’t appreciate a well taken goal.

The crux of the matter is that I no longer look forward to going to Carrow Road, and writing that makes me feel more miserable than any miserable midweek defeat possibly could. This win hasn’t changed that, but maybe it can be the start of something that will.

A good away point or an opportunity missed? It's both, but here's Jon Punt to tell you about what he thinks anyway...

We can’t always get what we want - but did we get what we need? Paul Buller checks in on a slightly perkier showing.