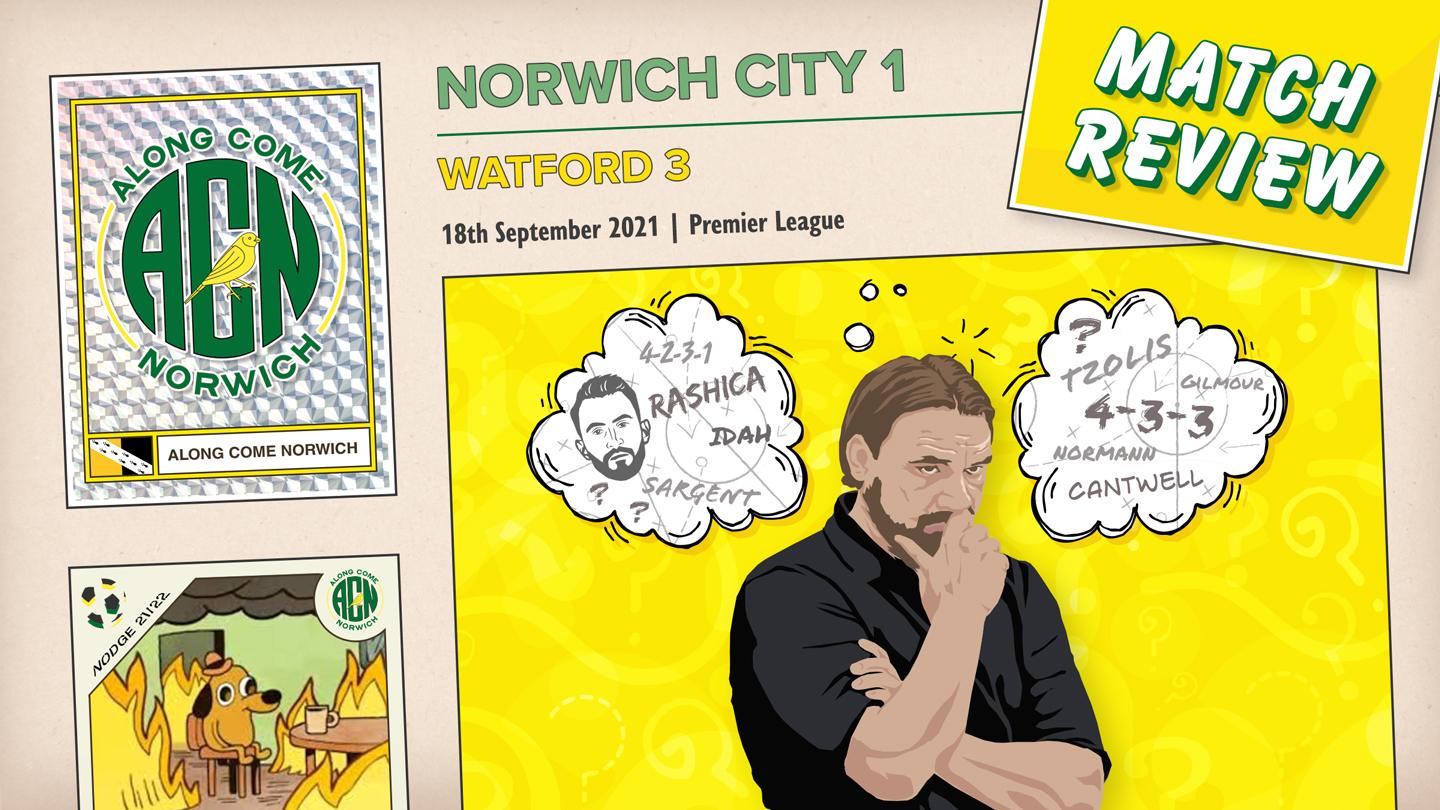 It is a very, very thin bundle of straw to be clutching at this stage, but it does appear, on the main, that the players themselves (with one or two notable, and critical, exceptions), are actually okay on the whole; and the myriad of issues right now are almost all tactical and coachable. Most clubs wind up on ridiculous losing streaks due to top-to-bottom issues, principle of which usually involves a large amount of players simply not giving a shit, them not being good enough, or both; on top of structural and financial issues in the upper echelons of management and ownership.

Not the case here. All problems appear to be on the pitch. A tiny speck of light right at the edge of that cumulonimbus perhaps. But a speck nonetheless.

Team selection, tactical set-up, not knowing the formation, poor passing, counter-attacking, lack of the high press, the left wing back position, bad body language, giving the ball away from throw-ins, poor responding to adversity, no chances of coming back from going behind, somehow conceding opposition chances from our own corners, strange substitutions. A slag heap of spoil is piling up high for Norwich right now, with little in the way of answers.

Watford’s third goal was a crushing blow. Not just in the context of the match, but potentially to the entire principle of Webber/Farke era Norwich City – a belief in which I have been one hundred percent unflappable since I watched Timm Klose aggressively fistpump the away end at the City Ground after an excellent comeback win against Nottingham Forest in 2018. That third goal was a burying your fingers in your eyes moment. While hindsight is always 20/20, some odd soundbites and head-scratching decisions over the summer all seem to be magnified 20-fold now; with zero points after five and a shocker against a relegation rival at home. Pressure does strange things to even the most resolute of people and with Norwich currently feeling like a car that you know isn’t too reliable, every little bump and vibration is its own mini panic attack.

For myself personally, as a fan who considers themselves neither to be too positive or too negative – and simply will pass judgement on what they will see without wanting (and occasionally failing) to take football too seriously – what a quandary to be in. The epoch of belief and the epoch of incredulity all at once. Norwich in the Premier League, this time with all of the tools for the job, but yet again looking like they are running out of ideas. For all of our pisstaking and incredulousness at external social media comments and Match of the Day pundits, here we are right back in the mire once more. And once more, as annoyingly as ever, proving all the bellends right.

It’s early days, as everyone at the club keeps saying. The first four games could always be treated as write off to some extent, and judging by performances and squad selection, it looks like this was the case (even if there was an argument that that is evidence of the sort of defeatist attitude Farke himself was rallying against pre-match). But, before we know it, like in that anxiety dream I am sure we’ve all had, without some sort of urgent turnaround, the train will have once again left the station without us.

This was Sissoko air kicking the ball and making everyone laugh. However…

After Sissoko air kicked the ball and made everyone laugh, we failed to pick up possession. The ball was pinged to our left flank and then the inevitable occured.

Krul. A bit of a Norwich cliche to praise the goalkeeper in times of dire straits (see Barry Butler winners from relegation/poor seasons), but three excellent stops that cannot be sniffed at.

A rallying cry from a manager or a player usually does actually trigger a response from the supporters, and this was no exception as the game kicked off. But, as we Norwich fans have experienced on so many occasions down the years, such a rallying cry can look slightly stupid when we go and concede an extremely soft goal within the first 15 minutes. It was almost inevitable that this was going to happen here.

“Why am I going to bother, if they aren’t going to bother?” can always be something of a fallacious point for a supporter to believe – because you may as well not go to the football at all if that’s the belief you take to matches – however for that second half it was also difficult to argue against it; as faces were wiped, eyes were covered, hands were held outstretched and heads were scratched. With the majority of the last few season’s cult heroes having now left (with their own credits in their own banks mostly intact), the current bunch are instead starting with clean slates when it comes to supporter sentiment. As such, at the end of the game, came a potential toxic turn; a loud, shrill boo. The likes of which I haven’t heard in Carrow Road for a very long time. Things could get very messy very quickly.

You’re used to losing as a Norwich fan. Losing is the name of the game. We lose all the time. My first ever Norwich City match was a loss, as I am sure it was for many of you reading this. I’ve seen us lose in the last minute to dodgy goals. I’ve seen us throw leads away. I have seen us get thrashed in relegation deciders. If you are a Norwich City supporter you know that, at some point, we are going to lose. The smooth almost always leads back to the rough.

Yet losses still hurt and losses are still painful. Losses are depressing. Losses can ruin your week. “Is losing fun? IS LOSING FUN? (No?) Then what are you having fun for?” Brad Pitt’s Billy Beane demands in Moneyball as he catches his players dancing away in the locker room after another Oakland A’s loss, using a baseball bat to smash up the stereo. It’s impossible to win all the time. I know that. You know that. But there becomes a tipping point where notions of fun start to fall away, and it all becomes a bit too annoying. A bit too humiliating. A bit too embarrassing. It is only football. But it means so much because it doesn’t really matter at all, and this is where that pain can flare up. The smug comment on Soccer Saturday that you know deep down is actually, right now, probably right. The pisstaking from the away support that’s entirely deserved. The confusing comments on certain aspects from the manager despite some fairly stark evidence to the contrary. It is, and forever shall be painful.

And, right now, none of this is very fun at all. 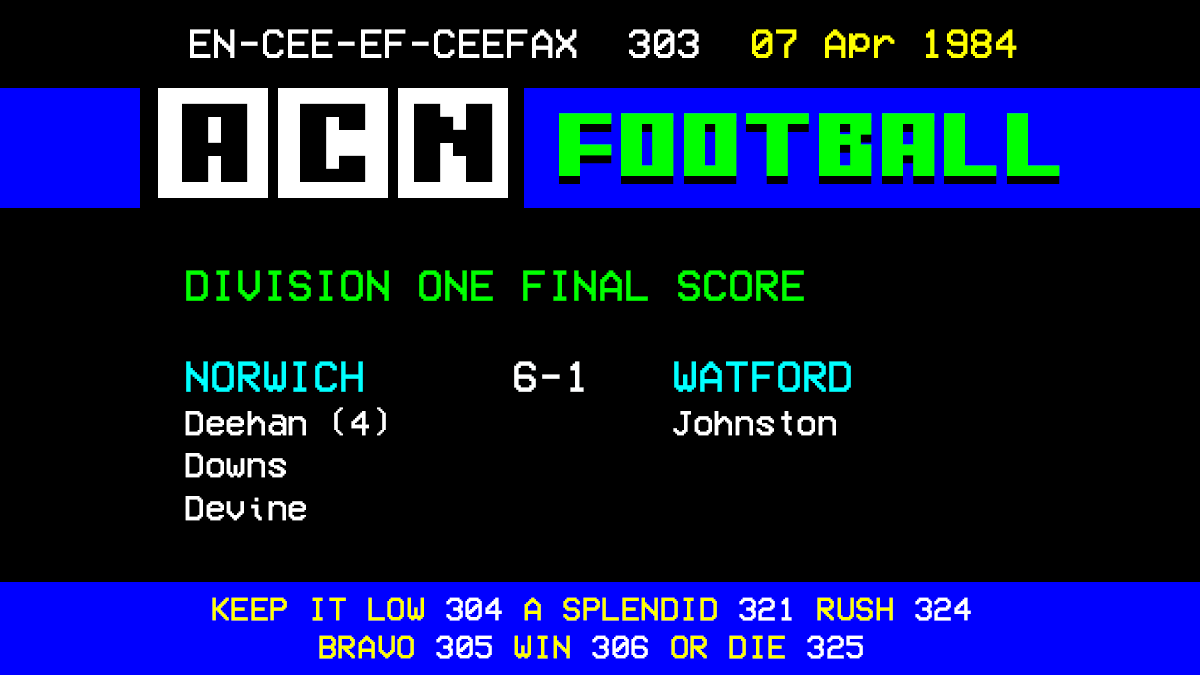 For this week’s Flashback, Nick Hayhoe looks at a record result that we could really do with a repeat of this weekend... 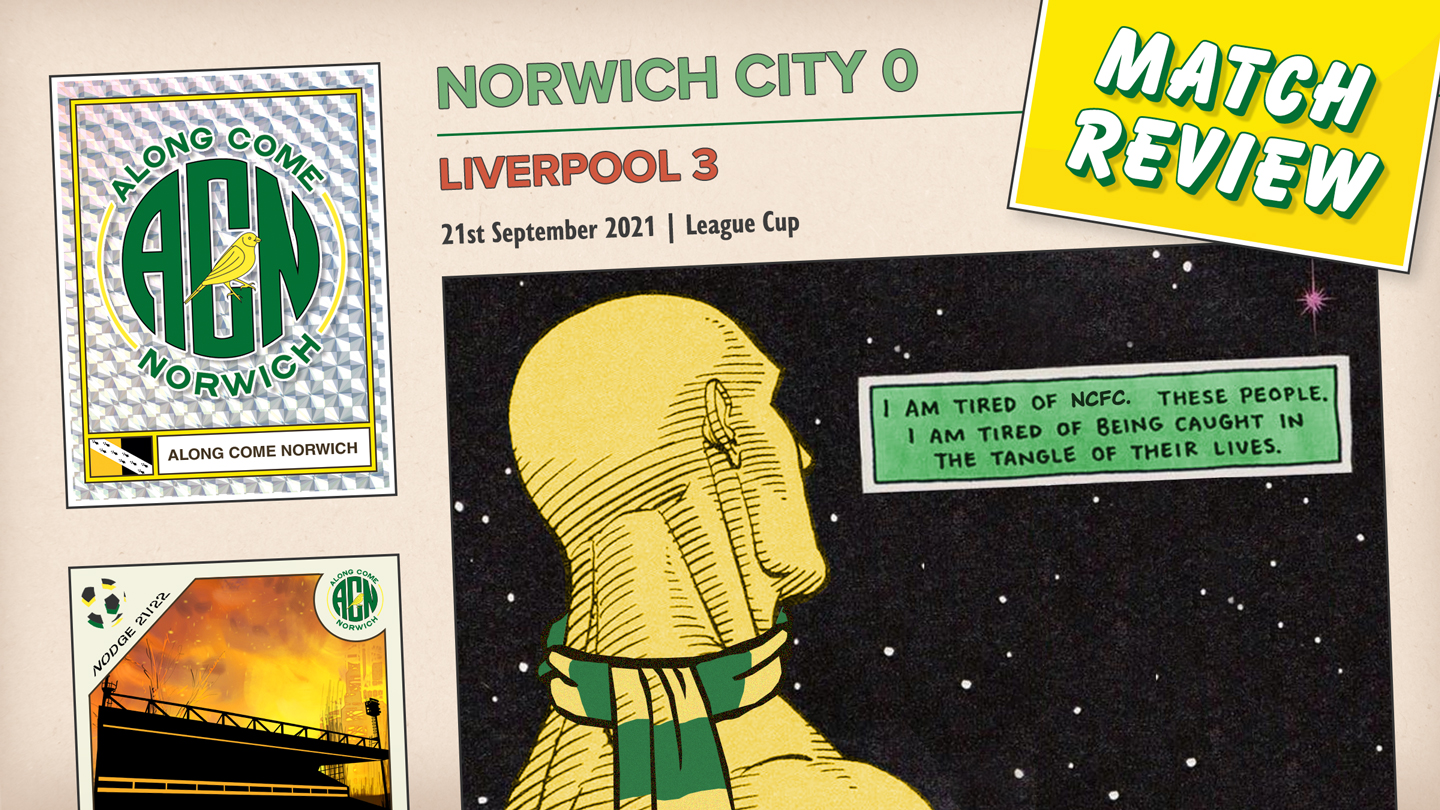 Another association football match, another Norwich loss. Maddie Mackenzie looks back at a confusing and difficult night at Carrow Road, and wonders where we go from here