There was pyro. There was LIGHT. There was a miserable defeat. We poked a despondent Nick Hayhoe with sticks until he could summon the energy to type. 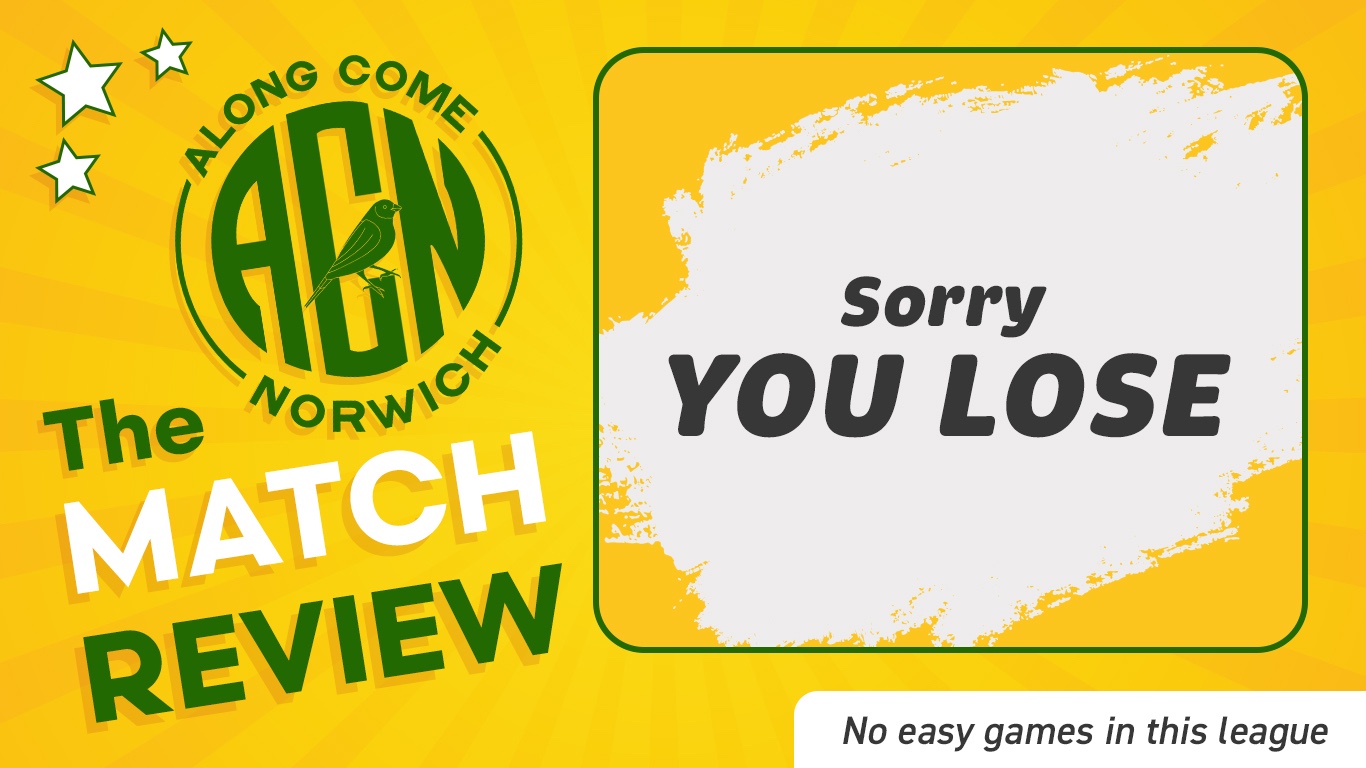 The October chill in the air was finally noticeable as the mists descend into Norwich from the marshlands of the Broads when I walked down the hill from the city centre towards Carrow Road – lit up with its new floodlights like a Cape Canaveral space launch. Unfortunately, this was the only proper “football feels” that I got over the course of the entire evening, for the atmosphere inside of the stadium turned out to be a decompressed mixture of nothingness, annoyance and what is (due to what is an apparent scrap in the Upper Barclay) starting to be a light dusting of toxicity. Even (or should I say, inevitably) a bunch of flashing lights and flames pre-kick off did little to prompt anything but some prime Norfolkian headscratching, indifference and chuntering. Our own version of flicking the Vs I suppose.

Laughably the only time a song sparked up was that new away day number I am yet to know the words to, and this happened right before Luton scored.

The two pints in the Murderers the start; an Edith Cavell ale and a Heineken, and the pint of Budweiser (stop laughing at the back I like Budweiser alright?) at the ground really worked well together as a system to take the edge off the night and these were then supplemented by a Chicken and Leek pie that defended well against hunger pains. Some excellent tactical nous with the team selection shown there, if I do say so myself.

There’s nowhere I can go here. Even a glib remark or withering joke is just exhausting at this point. Even the half time Tampa Time, which is actually really good for a laugh normally, seemed to be under Smudgerball’s spell – jaded and languid.

Kenny McLean’s sending off and Smith’s subsequent insistence that the club were going to appeal, despite it being one of the most obvious red cards I have witnessed live, was the final brick in a wall of desperation that has been building over the last few weeks. If it had been any other player than I can’t help but wonder if they would have been subsequently (and rightly) vilified instead.

Additionally, this was the first match played after the release of the previous years’ club accounts. The grim cold-water-in-the-face reality of that document has meant that, suddenly, not getting promotion could land us back at square one after all of what the Webber era has been. I found that it did not leave the back of my mind all evening, knowing that I was likely watching the majority of these players for the last time.

You’ve read and listened to pretty much everything by now I’d have thought. There’s not really much more I can say on the subject of the big subjects of our time: The Manager; The Philosophy; The Connection; The Atmosphere; The Finances; that would add anything worth more to the discussion.

My simple take is that football is not supposed to be something that should be endured with the emotional reluctance that watching Norwich City is now. The manager must go, of course, but in reality, that is a smaller part of the wider ennui problem that the club has created for itself. Several times during the match I wonder if I am jealous of Luton fans, with their club being the absolute leader in the league when it comes to fan relations, culture, outreach and generally “not doing shitty things” like getting a questionable NFT card ‘game’ as a sponsor. Fickle as I am I am still undecided on that, but it is still unquestionably the case that Norwich City, after several years of carefully and delicately building fan relations to a peak, have lost the plot when it comes to external relations. And this is really causing an irritating itch as much as the football. A ‘required media only’ order is still in force, safe standing is still apparently miles off from being in the Barclay, the club still haven’t signed up to Her Game Too, empty seats are starting to spring up, the flags have been missing due to a wider feeling of disillusionment from those who distribute them – and even the drum situation has been bureaucratized to the nth degree by people who believe that they need to make some sort of job for themselves in situations where it is not required. The atmosphere has been completely killed off at home matches, and Nothing Football is being served by a manager who doesn’t really want to be here.

It’s not dark times. It’s nowhere close to being dark times. But, my god it isn’t half beige.

We really did! That is to say our women’s team went further than the men’s ever did (sound familiar?). Cameron Huggett outlines the opportunities ahead for a return to glory - if we can give a little support early on.

The boys are joined by Archant's Connor Southwell to dissect Dean Smith's performance as head coach, the disconnect and what we might expect from the weekend....